Early in my career, I was working for a government institution, and was assigned a new manager. We didn’t know each other except by reputation. We were as different as dirt and water. I had long hair and a beard; he was clean-shaven and sported a crew-cut. My politics were liberal; he was a Nixon Republican. I attended protests against the Vietnam War; he had completed two tours of duty there and was a decorated Marine Corp officer. I liked to wear Navajo shaman shirts and moccasins; he was never caught without a sport coat and tie.

You get the picture.

Shortly after he started, he questioned why I’d taken so long to go to another building to attend a meeting.

I was furious. Who was this “soldier boy” to question how I spent my time getting my job done. I was a professional with a masters degree, for gosh sakes. Of course, the logical thing for me to do was to ask Mike what he had wanted and clarify why I needed to take two hours. It also would have been a good time to discuss our mutual expectations about how I manage my time.

But did I do that? Nooooooo. I was much too immature at the time. So I sulked and stewed about it for weeks without saying a word to him. I was civil, but not friendly. I avoided him when I could and avoided eye contact when I couldn’t. I did the minimum required and became disagreeable to the point of belligerence whenever we discussed an issue. I also bad-mouthed him to others whenever I got the chance. I was well on the way to becoming an “Employee From Hell.”

A few weeks later, Mike walked into my office, closed the door. “I get the feeling you’re ticked off at me. Is that true?” he asked. I did my best to look puzzled and denied there was anything wrong. He looked me in the eye and said, “B—s—. I can tell when something’s wrong. I want you to level with me.” When I told him, he was dumbfounded. It turns out that he hadn’t meant to accuse me of slacking, which is how I had interpreted his asking about the time I’d taken. He then apologized and asked that we start off on a new foot.

From that day forward, Mike and I got along just fine. Looking back, I realize that I acted so childishly was because I was feeling a little paranoid because Mike was my total opposite. I had created such a negative image of him in my head before I ever met him that I was ready to jump on anything he did.

It makes me realize that as managers, our employees watch us closely. We have power over them. We can affect their careers and their lives. Consequently, they watch us closely and our actions can take on meaning for them that may get distorted or blown out of proportion. For example, in one of my management seminars, I made mention of the CEO of the company that was sponsoring the event. A woman in the front row, who worked for that company let out a disgusted gasp and rolled her eyes. I asked her later in private about her response and why she seemed to dislike the man. She replied that she thought he was stuck up. (Yeah, sounds like high school, right?) When I asked her why, she replied that the two times she had ever had any contact with him was in the hallway where she had said “good morning,” and he had not replied to her.

I happened to know the fellow and I found him to be a charming, kind and considerate person who would never intentionally blow someone off like that. He did happen to be an absent minded professor type, and my guess is that he hadn’t even heard her say “good morning” because he was preoccupied with another matter.

The scary part here is that as managers, if we don’t take action to intervene, like Mike did with me, the perceived insult can fester into a sore worker who can eventually become an Employee From Hell. So I suggest practicing some vigilance watching how people respond to you. If you sense trouble in the waters, don’t be afraid to have one of those difficult conversations where you bring the issue out in the open. The worse thing that can happen is that the person denies any problem, but at least he knows you’re interested. 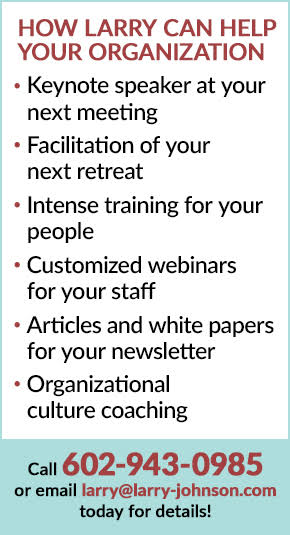