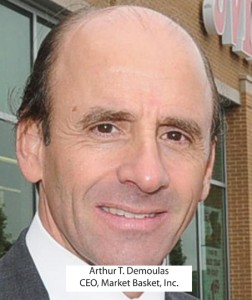 You might have noticed in the news this past summer the brouhaha at Market Basket, a chain of grocery stores located in New England.Founded in 1917 by Greek immigrant brothers Athanasios (“Arthur”) and Efrosini Demoulas as a small Greek grocery, specializing in lamb, it is now a 72 store chain that stretches from Cape Cod to southern Maine. Over the years, the descendants of the founders have engaged in vicious disputes over ownership and control of the company. In June of this year, Arthur S. Demoulas, who had acquired chairmanship of the board and a controlling percentage of the company stock, fired his cousin Arthur T. Demoulas, who had occupied the role of CEO since 2008.

This was done in spite of the outstanding performance that the company had experienced under Arthur T’s leadership. Sales had grown from $3 billion per year to $4 billion and the number of employees had increased from 14,000 to 25,000. This was all during a time when competitors like Stop & Shop and Shaw’s shut down many stores due to financial trouble.

What makes this story notable is that in response to Arthur T’s firing, six high-level managers resigned, and 300 employees held a rally outside Market Basket’s Chelsea, Massachusetts flagship store on June 24 to protest his dismissal. On July 18, 2014, 5,000 employees and customers held protests at the company’s headquarters in Tewksbury demanding that Arthur T be reinstated as CEO. The stores and shelves sat empty while Arthur T’s loyal fans waited for a resolution from the courts. It came in the form of Arthur T managing to put together the financing to buy out his cousin Arthur S. and his cronies on the board and put himself back in charge, much to the delight of employees and customers alike.

The question I keep asking myself about all this is: “What does Arthur T. do to gain such loyalty?” Obviously, people love this guy.

According to his employees, the answers are simple. He (ergo the company) treats them right. He cares about them as people and treats them the way you would treat family, which is ironic, considering the perpetual feuding and dysfunction of Arthur T.’s own family.

Here’s how that plays out:

1. Employees are paid well. Market Basket’s starting wages for full-time clerks is $12 an hour – well above minimum wage. Employees who work more than 1,000 hours a year are eligible to enter a profit-sharing program. Employees also receive benefits, including healthcare and paid sick leave. Isn’t that something you’d want for your family?

2. Employees get profit sharing, which results in feeling a sense of ownership in the company. It also results in healthy retirements, based on the company’s success. In an interview with the Boston Globe , Arthur T. recounted a recent retirement party at which all four departing employees left the company with large nest eggs. Two store directors had more than $1 million; a produce supervisor had $800,000; and a truck driver was leaving with more than $700,000.

3. Arthur T. acts like he cares about his employees. I say “acts like he cares” because although most managers and executive will say they care about their employees, it’s the visible behavior the employees observe that tells them if it’s true.

It is said that Arthur T knows the names and backgrounds of all 25,000 people working at Market Basket. Whether that is true or not, stories abound about his ability and willingness to walk into the stores, which he visits often, greet people by name and ask about their families. He’s known to visit sick employees in the hospital, attend their weddings and funerals, and personally help them during crisis. In an interview with the Boston Globe, Middleton store manager Terry McCarthy described a call he received from Arthur T. two years ago, when a serious car accident sent his daughter to the hospital. “Mr. T got on the phone call, very reassuring, very professional like he always is,” McCarthy recalled. “He said, ‘Terry, is that hospital able to handle her injury?’ The next question he asked — I’ll take it to my grave — he said, ‘Do we need to move her?’ ”

So if you’re looking to build a corporate culture where people are loyal, take responsibility for the welfare of the organization, and will go the extra mile, it only makes sense to emulate Arthur T. And if you do it well your corporate culture will flourish and your chances of your employees taking responsibility for the organization’s success should greatly improve. If nothing else, if your management decides to fire you, perhaps your employees will come to your aid as they did for Arthur T.