I’m a big believer in Bear Bryant Motivation and here’s why. I usually lead off my management workshops by having people brainstorm a list of words and phrases that describe the worst managers for whom they have ever worked. Invariably, the sin of “Takes credit for your work,” is mentioned. Yuk. Isn’t that the worst? You put your heart and soul into a project, only to have your boss claim the credit for its success.

I’m reminded of something the late, great Paul Bear Bryant said in the book by Pat Williams and Tommy Ford, Bear Bryant On Leadership. (If you’re not a college football fan, he was one of the most successful college football coaches of all time. He was portrayed in the movie Forest Gump). 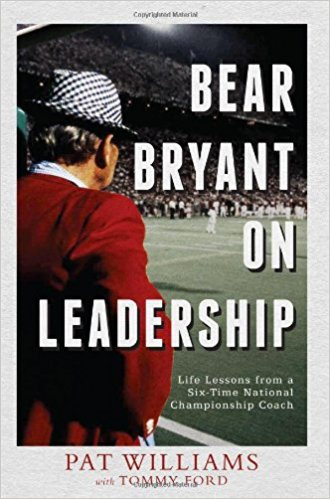 In other words, Bear Bryant was willing to take the heat when things went wrong, never blaming his team for the failure. When things were going ok, he and the team shared the credit. But when an individual or the team did exceedingly well, he made sure they got the credit.

Now I hope you’re saying to yourself, “Yep, that’s me. I’m just like Bear Bryant. When my team screws up, I take the blame. When everything’s fine, we share the credit. But when there’s a big victory, I make sure my people get all the glory. I practice.

Hmm – Bear Bryant Motivation Is Easy to say…harder to do.

Imagine your boss asks you to come into her office and close the door. (Bad sign, right?) She then proceeds to tear into you because, without checking it herself, she had presented to her boss a proposal that earlier you had given to her. The proposal was poorly done and her boss is furious with her, so now she is furious with you.

You know, however, that you didn’t write this proposal. You had delegated to one of your direct reports, and, like your boss, you had not really looked at it before passing it up the chain of command.

Question: What is your temptation at this very moment?

If you are like most of us, words blaming your subordinate will come tumbling from your mouth like water over Niagara Falls.

Practicing Bear Bryant Motivation would suggest that you suck it up and respond to your boss by saying, “Sorry boss. My fault. I’ll get it corrected and make sure doesn’t happen again.”

This doesn’t mean that you wouldn’t hold your subordinate accountable for giving you sloppy work. I’m sure Bear Bryant conducted “interesting” practice session after a severe loss, especially if his team was not trying hard enough. But to the outside world, Bear Bryant always took the heat.

Let’s consider another scenario. Your boss calls you into her office to congratulate you for the “brilliant” proposal you gave her earlier. She admits that she hadn’t really checked it out, but when her boss asked her for it, she pulled it from her brief case and handed it to him. He read it and loved it. Being a good practitioner of Bear Bryant Wisdom, she told him that the report had really come from you. He was so impressed that he told her to arrange a trip for you and your family to go to Switzerland so you could present the proposal to an international forum of leaders in your industry – the opportunity of a lifetime.

The challenge for all of us is to be that kind of boss. For more info on being a great boss, check out: