For many managers, giving employee feedback can be intimidating and sometimes nerve wracking. Of course, giving feedback that’s positive is usually pretty easy. You can just say, “Hey, great job.” It’s always more effective, however, if you specifically list out what was so great about the job. That takes more effort but usually makes the feedback more effective. Either way, it’s usually easy and can be fun to do.

It’s when you must give people corrective feedback that it gets tricky because somehow or another, the recipient will often take it personally and get upset, feeling that you’re disparaging him as a person rather than trying to get the problem at hand corrected.

Employee feedback can be divided into four categories.

(1) Reinforcing, saying, “Hey, good job. Keep doing what you’re doing. It’s working.” (2) Corrective, saying, “You need to change course because whatever you’re doing or not doing isn’t working or needs to be improved.”

For example, you can have specific, reinforcing feedback which reinforces what a person has done in a specific way. “Hey, Bob, I really like the way you did this report, especially how you broke out all the costs and you described how the profit increase will offset the cost of each step.” I’m simply describing factually what he did and why I’m happy with it.

If, on the other hand, if it’s corrective feedback I need to give, I’ll be just as specific, describing what’s wrong with the report and what needs to be changed. “Hey, Bob, I’m concerned with your report because the costs for each step are not broken out and there’s no explanation of how they’ll be paid for. Can you please make those corrections?

You can also give reinforcing and corrective feedback that is general, rather than specific.

General, reinforcing feedback is vague and describes the reason for the feedback in fuzzy terms or not at all. For example, “Hey Bob. Thanks for being you. You’re a really great guy and it’s nice to have you around here.”

It’s what we call psychological cotton-candy – sweet to the taste, but not much substance. It may make the person feel good but it doesn’t clarify what he did that was praiseworthy or what he should continue doing to deserve the positive recognition.

Then there’s general, corrective feedback. “Bob! What’s wrong with you? This report is unacceptable. Please fix if.” Pretty general and pretty devastating. And it sheds no light on what is wrong with the report or what Bob needs to do to fix it.

Keep in mind that each of these forms of employee feedback serves a purpose. It’s just that specific feedback that focuses on the problem rather than the person tends to be the most effective. Think of it this way: specific reinforcing feedback and specific corrective employee feedback tend to shed light on the situation, providing information on what needs to be continued or corrected.

General employee feedback that is reinforcing often provides a nice warm feeling but usually doesn’t provide any light. General employee feedback that is corrective, on the other hand, creates nothing but heat on the part of the recipient. So, if you want to avoid creating heat and having people ticked off at you, be general in your corrective feedback. Otherwise, being specific is the way to go. 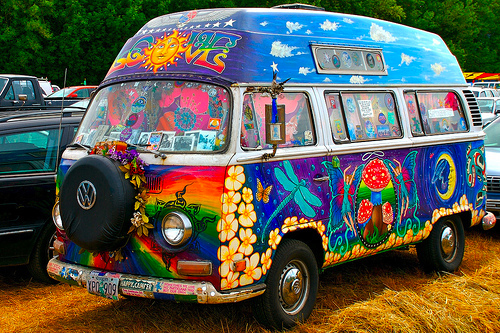 Back in the 60s (and I can remember the 60s, sort of) there was a VW Microbus, full of young people and covered with psychedelic paintings, going down the road. (I used to ride around in one of them.) Coming the other way was the local sheriff, and as they passed each other a woman in the Microbus stuck her head out the window and yelled, “PIG.” You may not be old enough to remember that back in the 60s, when somebody called a police officer a pig, that was a pretty derogatory term. So, the sheriff got mad and responded by yelling back at her, “SOW.” He then continued around the corner where he hit a pig in the road.

Now, let’s analyze that interaction, according to this little matrix below. From which quadrant did her comment, “Pig,” come from? Was it specific reinforcing? Well, it was specific in that it described a pig. Was it reinforcing? No, she wasn’t telling him to continue on his path. Was it corrective? Yes.. She wanted him to change his direction. Because she was short on time, she was only able to yell “PIG.” If she had more time, she could have been more specific bynsaying, “Excuse me officer, but you may want to take notice that up ahead in the road is a pig, and if you continue at your present rate of speed, the pig will become ham on your grill.” So she was being as specific as she had time to be.

On the other hand, from which quadrant did the officer think her comment “PIG” was coming? Obviously, he thought it was a general corrective comment, meant to insult him, and he responded in kind.

So, if you’re going to give employee feedback that is reinforcing, you can get away with it being general, it just doesn’t say much. It’s always better to be specific because it will shed light on what the person is doing right. On the other hand, if you are giving employee feedback that is corrective, Heaven help you if are general about it. It’s unlikely to shed any light on correcting the problem and very likely to create a lot of heat on the part of the recipient.

If you’re a millennial and you’re giving employee feedback to to a Baby Boomer or a Gen-Xer, there are other things you may want to consider. Check out my videoblog with my daughter, Meagan Johnson by clicking here.

You can check out Meagan @meaganjohnson.com